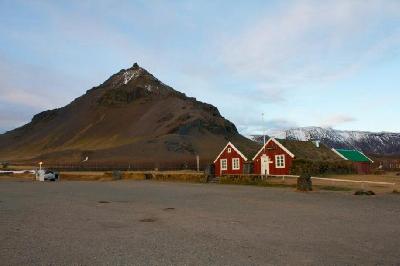 Arnarstapi is a tini and beautifully situated fishing hamlet below Mt. Stapafell, on the shore of an encircled harbor where small fishing boats unload their catch. The population today is small, but in the past centuries, Arnarstapi was an important trading post due to its harbor, but nowadays it has lost its importance as such, but instead it has become an extremely popular tourist attraction.

A walk along the cliffs on the shore, starting from the harbour, leads to a series of interesting sights with beautiful coastal scenery, rock formations and a rich birdlife. Thousands of seabirds nest in the cliffs, for example Fulmars, Kittiwakes and Shags. The cliffs on the coast are pitted with caves, some with blowholes on the roof and sheets of spray rise to a great hight when a gale is blowing towards the rocky coast. Offshore lie great craggy rocks surrounded by boiling surf. An interesting and picturesque sculptured arch rises on the shore below the lava encircled harbour. Above, the scenery is crowned by the majestic glacier Snæfellsjökull that doubles as a volcano and about one and a half a century ago, the famous French author and novelist Jules Verne wrote one of his best known books,  The Journey to the Center of the Earth. This journey started down the crater of Snæfellsjökull and into the Earth´s core.

A great number of Arctic Terns nest in the Arnarstapi area every summer and one of the largest nesting colonies of Arctic Terns in the country is to be found there. The Arctic Tern is an incredible bird species but they fly the longest migration route of any bird species in the world. The same individual birds are known to have arrived at exactly the same spot in Iceland every spring for many years, after flying to Iceland all the way from Antarctica, - halfway around the globe. After the nesting season, they return to Antarctica together with their chicks and  a few month later they return to the same spot to nest again.