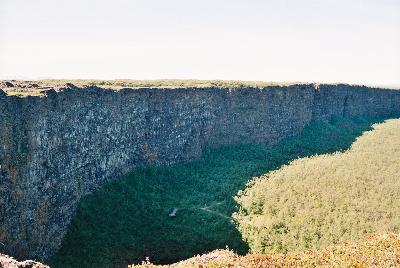 Ásbyrgi Canyon is a true nature's pearl of Iceland. It is an enclosed canyon shaped like a gigantic horseshoe. It is about 3.5 km long and over 1 km wide.

The shape of the canyon derives from a legend of the horse of Óðinn, the chief god of Norse mythology. According to an old legend, the horse stepped down in Iceland and left its giant hoofprint, creating Ásbyrgi.

However, today scientists have come up with a different theory on why Ásbyrgi is shaped like a horseshoe. Evidence of catastrophic floods can be seen all along the river Jökulsá á Fjöllum and now it is known that the canyon was created during a catastrophic flood in the glacial river at the end of the last Ice age that came to an end about ten thousand years ago. It is believed that the flood was caused and triggered by a volcanic eruption beneath the ice cap of Vatnajökull Glacier, located far to the south of Ásbyrgi. During the eruption, enormous quantities of ice melted. A second eruption beneath the ice cap is believed to have occurred about 3000 years ago, causing a second catastrophic flood that gave the canyon its present shape. During this flood, the river changed its course to flow a few kilometers east of Ásbyrgi, where it flows today. In the middle of the canyon is Eyjan, -  The Island, a 250 meter wide cliff, towering above the bottom of Ásbyrgi. The length of the canyon is about 3,5 kilometers and it is about 1 km wide. The canyon of Ásbygi is about 100 meters deep but it is only a small part of a much greater and a longer canyon called Jökulsárgljúfur further upstream in the river. Due to the depth of the canyon, Ásbyrgi is a very sheltered place and this explains the name Ásbygi that translates as  Shelter of the Gods. As a result, there is a rich vegetation cover within the canyon and a small forest has formed.

There are interesting hiking trails in Ásbyrgi and the best known and most popular is a trail leading to Botnstjörn at the end of the canyon. The trail is called Skógarstígur and is about 800 meters long and a reasonably easy hike. Ásbyrgi is a part of Jökulsárgljúfur National Park and near the entrance to Ásbyrgi, there is an interesting information and service center. There is a good campsite located within Ásbyrgi Canyon. Many self drive road trips and other tour packages include a visit to Ásbyrgi Canyon and can be found at www.tour.is