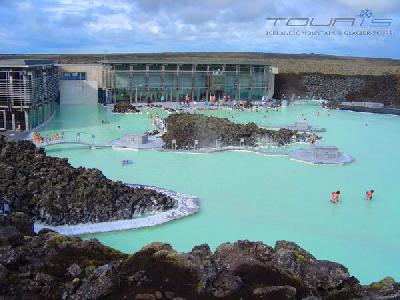 The Blue Lagoon is a bathing area that came into existence in 1976 by accident. It is located in the middle of a vast lava field, as a result of operations in a geothermal power plant nearby. It is located a short distance from Grindavík fishing town.

In the early 19th seventies, several boreholes were drilled into the ground at the Svartsengi geothermal area in order to find hot water. This turned out to be a successful operation and hot water at high temperatures were found. Temperatures were very high and reached over 240 degrees C At this temperature, water is turned into steam under high pressure. Due to the high temperature, the water at Svartsengi is very mineral rich. It is a salt seawater and in addition to the salt, it has a high concentration of other minerals, like sulfur and silica. Due to the salt and other minerals present in the water it is not suitable for being piped directly to the homes from heating and other purposes as the minerals are corrosive and would quickly damage pipes and radiators. Therefore a heat exchange station was built where the mineral rich water from the ground is used for heating cold fresh water that is used for heating. Like mentioned earlier, the temperature of the water in the ground is high, more than 240 degrees C. As a result, the water is turned into steam under a high pressure and at the power station, the steam pressure is also used for spinning turbines for generating electricity, so it can be said that the power station has a dual function, a heat exchange and production of electricity and the Blue Lagoon is a sort of a biproduct of both. After the mineral rich water has gone through the power station it is dumped into the nearby lava field where it filled a depression in the lava to create the famous Blue Lagoon.

Bathing in the Blue Lagoon

Soon after it was created, people started to visit the warm "waste" waters and started to notice that for those with conditions like psoriasis the water had soothing properties do to its high content of algae, silica, and other minerals. This has now been confirmed by academic research to be true and treatments supervised by a nurse and dermatologist are available. Today, a lot of development has taken place to make the lagoon more accessible and allows more people to visit, so now the Blue Lagoon is one of Iceland's most visited sites where you can go for a relaxing bath in the surreal surroundings.

At the Blue Lagoon, you can enjoy a stroll, dine at the Lava Restaurant, get a massage treatment, and visit the Blue Lagoon Café. You could spend all day there but most visitors tend to stop there for about 2 hours bathing in the lagoon, Due to its popularity and limited number of people allowed to enter the lagoon at any given time, it is recommended that you book your visit in advance.

The Blue Lagoon is located only about 20 minutes drive from Keflavik airport and 45 minutes from Reykjavik City, making it an ideal place to visit on your way to or from the airport. Keflavik Airport is is the main International Airport in the country and by far the largest. The airport is located 3 kilometers to the west from Keflavík, which is the largest town on the Reykjanes Peninsula. Originally the airport was built during World War 2 by the US military. Keflavik Airport is today the main hub of Icelandair, which is the largest carrier in Iceland. The air terminal is called Flugstöð Leifs Eiríkssonar or the Leif Eiríksson Terminal and is named after Leifur Eiríksson or Leif the Lucky, who discovered America around the year 1000. He was an Icelander and was the first European to set foot on land on the American Continent.