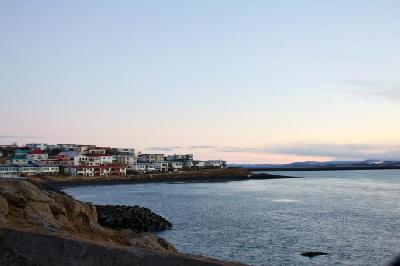 Borgarnes Town, with a population of about 2000 people is located in a scenic setting on a rocky promontory jutting out from the northern shore of Borgarfjörður Fjord. The second longest bridge in Iceland traverses the Borgarfjörður Fjord at Borgarnes. Borgarnes is a commercial centre for a large farming area called Borgarfjörður district with various services and light industries, mostly related to farming. There is a small harbour in Borgarnes but no fishing fleet, unlike in most other coastal towns and villages. The town park, Skallagrímsgarður, is well laid out in a hollow among the rock ridges.

In the park is found the traditionally reputed, grave mound of Skallagrimur Kveldúlfsson, the first settler in this district about the year 900. There is no evidence that the site is authentic. Among places of interest in Borgarnes is the Settlement Centre, - Landnámssetrið. This exhibition provides an insight into the settlement of Iceland in the 9th century as well as Egil´s Saga Exhibition which tells the story of Egill Skallagrímsson, who was the son of one the early settlers of Iceland, Skallagrímur Kveldúlfsson who was a Norwegian Viking. Egill Skallagrímsson was raised at Borg, a farm just outside of Borgarnes and the town derives its name from the farm. Borgarnes means Borg Peninsula.

Borgarnes is also a popular destination with tourists, since many places of interest are to be found in the surrounding Borgarfjörður District and there are several hotels and guesthouses within the town as well as in it´s immediate surroundings.

The homes and other buildings in the town are heated with geothermal water from Deildartunguhver Hot Spring, which is the largest hote spring in Europe in terms of volume of water. The hot water which is 97 degrees C is piped a distance of 34 kilometers from Deildartunguhver to Borgarnes Town where it is also used for washing and bathing as well as for an outdoor swimming pool in the town.