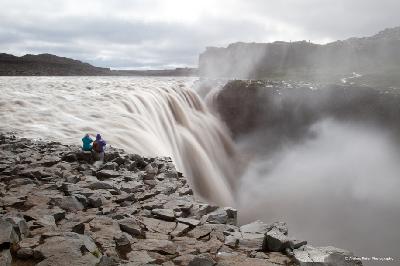 Dettifoss is Europes most powerful waterfall. It is about 44 m high and 100 m wide and has an average water flow of about 193 cubic meters per second. However, the water flow varies greatly, and in summer it grows and in wither it decreases since the river, Jökulsá á Fjöllum is a glacial melt water river that takes its source in the Vatnajökull glacier, the most extensive icefield in Europe, covering about 8500 square kilometers.

The waterfall can be accessed from both sides of the river. The west side is accessible by road number 862, which is a good and a paved road, while the east side can only be accessed by a rough gravel road, only passable and open during summer. Dettifoss plunges a 44 meter drop into the canyon called Jökulsárgljúfur which is a part of Vatnajökull National Park. From the eastern side, there is a rough hiking path that leads down to a lower level in the canyon, from where the waterfall can be accessed to view from close up. The hiking path is often wet and slippery due to spray from the waterfall, so visitors need to be extra careful and watch their steps in the rocky terrain. There are few things that compare to the feeling of standing beside this awesome power of nature.

There are two other waterfalls nearby in the same river. One is called Selfoss and is about a kilometer to the south of Dettifoss. The other is Hafragilsfoss, located below Dettifoss. Guided bus tours as well as self drive tour packages and road trips including Dettifoss are available at www.tour.is