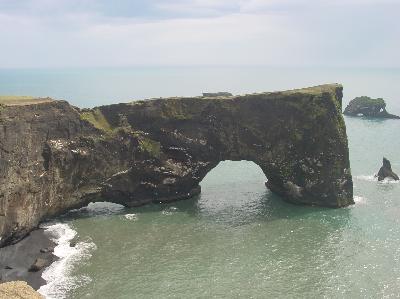 Dyrhólaey Nature Reserve is a small headland and the southernmost part of Iceland.

Dyrhólaey is about 120 meters high with sheer cliffs that in summer are a nesting colony of many species of seabirds, Fulmars, Kittwakes and a great number of Puffins nest here every summer. Dyrhólaey is also a nesting colony of the Arctic Tern, the bird species that travels the longest migration route of any bird species on the planet. They usually arrive surprisingly punctually in Iceland around the 20th of April every year, after flying all the way to Iceland from Antarctica, about half way around the planet. A few months later after the nesting season is over, they return to Antarctica together with their chicks. It is estimated that in a lifetime of an Arctic Tern, they will travel about 2,5 million kilometers only on migration routes. It equals about about 3 roundtrips between Earth and the Moon. Dyrhólaey is one of the best places in Iceland for birdwatching. A track leads up to the very top and to the unmanned lighthouse.

The name, Dyrhólaey means  Door Hill Island and derives its name from a massive stone arch that has been eroded by the ocean waves. The headland is of volcanic origin and is believed to be a crater plug, formed in a subglacial eruption during the last Ice Age.

There are many places of interest close to Dyrhólaey. A short distance to the east are Reynisdrangar that are offshore lava columns, situated on the Reynisfjara black beach. A little further to the east is the pretty village Vík, situated right on the black sand beach. In fine weather the views from here are very wide and splendid over the black sand beaches of the south coast as well as towards the nearby glaciers Mýrdalsjökull and the infamous Eyjafjallajökull Glacier but beneath the icecap of Eyjafjallajökull is an active volcano. Its most recent eruption was in 2010, causing serious and widespread disruption to air traffic in the northern hemisphere. Care should be taken near the cliff edges on Dyrhólaey, particularly those overlooking the sea.