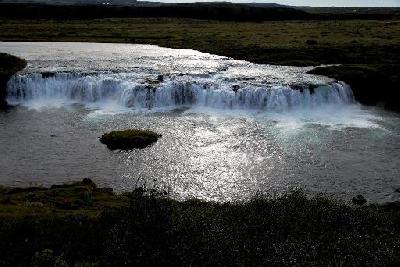 Near the road between the bishopric Skálholt and the Geysir area on road 35, is the beautiful Faxi Waterfall in a quiet spot and not visible from the main road, although it is quite close. The waterfall is located on the Tungufljót river and is about 7 meters high. Tungufljót has a large population of Salmon and one of the most popular angling spot is the pool below the Faxi Waterfall. By the side of the waterfall a fish ladder has been made in order to enable the salmon to get further upstream but before it was built, the waterfall was an obstacle that prevented the salmon from getting past it. On a good summer day, the salmon can sometimes be seen leaping up the ladder as well as in the pool. Faxi means a horse mane and once you see the waterfall, you will understand why it has been given this name.

Look for a signed turnoff for the falls along route 35 about 6km south of its junction with route 37 and some 10 kilometers to the south from Geysir. The river Tungufljót runs into the larger river Hvítá further downstream and the confluence is a few kilometers below Faxi. The waterfall Gullfoss is in the Hvítá river, further upstream.