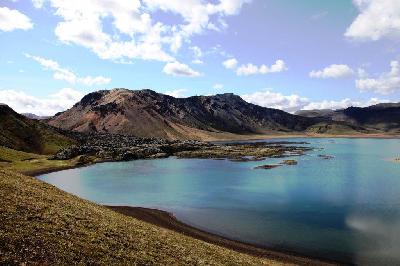 Lake Frostastaðavatn is a lava impounded lake surrounded by colorful Rhyolite mountains, close to Landmannalaugar in the highlands of the southern part of Iceland at an elevation of about 570 meters. The lake is rather small, about 2,5 square kilometers but still has a rich population of trout in it and has therefore become popular with anglers. A fishing permit is needed in order to fish in the lake.

The lake is situated by the side of the two main roads to Landmannalaugar, F208 and F225 and several small and moss covered volcanic craters are close to its lakeshore. The roads are only passable in mid summer by 4x4 vehicles.

Larger craters are also to be seen close to Lake Frostastaðavan and one of the most impressive is Ljótipollur, which is a beautiful crater lake a few kilometers away, situated close to the junction of F208 and F225. The route to Ljótipollur is quite steep and not accessible by ordinary vehicles so one needs to hike for a few minutes in order to get there. Another impressive crater lake is Hnausapollur, situated a few kilometers further away on road F208. Its rim is accessible by 4x4 vehicles.

The lakes surroundings of Lake Frostastaðavatn are stunning and extremely spectacular and there is a 6 kilometers long hiking trail between Frostastaðavatn and Landmannalaugar that runs over a rather rough and uneven terrain, partly across an obsidian black lava field.