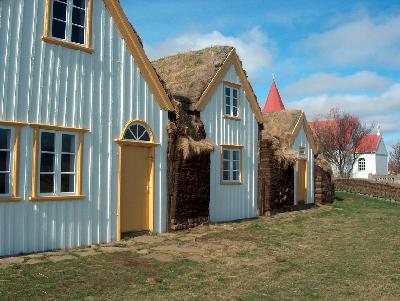 Glaumbær Folk Museum was originally founded as the Skagafjörður Heritage Museum in 1948 with the first exhibition opened in 1952 at Glaumbær Farm. The museum focuses on rural life in the 18th -19th century Iceland. The buildings on the farm date from the 18th - 19th century and clearly demonstrate how the first timber houses were built in the region. It is believed that a farmhouse built of turf, stone and a little timber was built at Glaumbær as early as the time of settlement of Iceland, more than 1100 years ago and ruins of a Viking age buildings have been discovered and excavated at Glaumbær. At the time, timber was scarse in the country and most of the available timber was driftwood from other countries.

Sauðárkrókur town is only a few minutes drive from Glaumbær. It is like most coastal towns in the country a fishing town but tourism has in recent years become increasingly important for its economy. There are several hotels and guesthouses at Sauðárkrókur as well as many other tourism related services, for example interesting boat trips to Drangey Island. A number of guided bus tours and self drive tour packages including Glaumbær can be viewed at www.tour.is