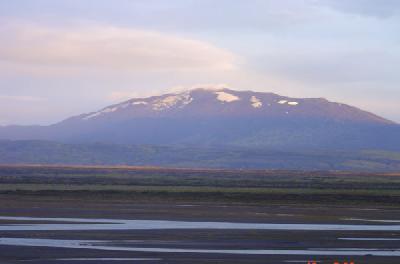 Mt. Hekla Volcano is among the best known volcanoes of the world. It is situated in the south of Iceland on a 25 miles long volcanic fissure and is about 3 miles long and about 1500 m. high.

Hekla's major eruptions are close to 20, during historic times and minor eruptions in its vicinity about 25. It´s earliest recorded eruption in the Icelandic history was a little more than three centuries after the settlement of the country when there was a major eruption in the year 1104, a devastating eruption the to nearby farmlands and far beyond. Vast areas of land were covered by thick layers of toxic volcanic ashes and as a result, numerous farms had to be abandoned. The ashes contained fluorine, which is toxic to livestock so large numbers of sheep were killed. The Viking age farm Stöng in Þjórsárdalur Valley was one of them and was excavated in 1939. It is now preserved as a museum. Eruptions in Hekla have time and time again destroyed or caused damage on the surrounding farms and farmland. Repeatedly, rivers of snarling incandescent lavas have poured down the slopes to spread over the relatively flat terrain below. The most recent eruption was in the year 2000, which was a minor eruption or rather a  tourist eruption like many locals say. This eruption did not do much damage, but attracted many visitors. In the middle ages, many Europeans believed that Hekla was one of two known entrances of Hell. The other was believed to be Stromboli.

Access
The easiest way up to the top is from the north. On a fine day, the view from up there is exceedingly fine. However, Hekla is currently (in 2021) expected to erupt soon and it is not considered safe to climb or to access close up as there is usually not much warning before eruptions start in Hekla.