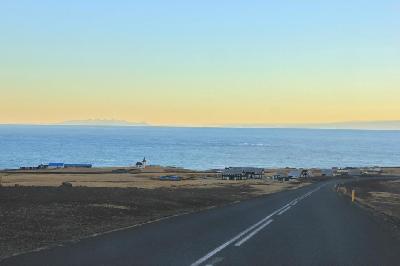 Hellnar is a beautifully situated hamlet, and a close neighbor of Arnarstapi, situated near to the tip of the Snæfellsnes Peninsula and at the foot of the magnificent Snæfellsjökull Glacier. There is a short detour from the main highway around Snæfellsjökull that leads to Hellnar. It is an old farming and fishing community in picturesque surroundings, on a raised lava edge, overlooking a small fishing harbor. Along the beach below, the pounding sea waves have created a huge vaulted cavern called Baðstofuhellir, which on a sunny day is filled with simmering blue light. There are numerous interesting black rock formations and cliffs on the coast, that during summer turn white with bird droppings as they are home to hundreds of nesting seabirds. Kittiwakes and Fulmars nest here in great numbers.

Nearby attractions and birdlife

Close to Hellnar is Arnarstapi, another small village, also with beautiful coastal scenery and rich birdlife in summer. Arnarstapi is a busy fishing harbor in summer but it is also well known for its busy nesting grounds of Arctic Terns in summer, where thousands of Arctic Terns make their nesting colony every spring. During nesting season, the Terns become very aggressive when protecting their nesting grounds and their chicks and tend to violently attack visitors that are advised to hold a stick or some object above their heads in order to defend themselves, while walking through the area but the Terns always go for the highest point of their target, - and they drop bombs too, - so beware of their droppings !

There is an interesting hiking trail on the coast between Hellnar and Arnarstapi with impressive sceneries and birdlife in summer. The trail is about 2,5 kilometers long and a relatively easy walk. Hellnar is a part of Snæfellsjökull National Park and the park's visitors centre is situated at Hellnar. There is a hotel located at Hellnar and by the harbor is a small café called Fjöruhúsið.