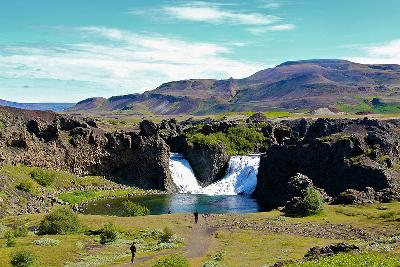 Hjálparfoss Waterfall is supremely picturesque and splits into two streams around a rock outcrop on the edge of a thick lava flow and plunges splendidly into a deep pool below. The waterfall gets its name from the surrounding area, Hjálp which translates to help in English. It was named by travelers riding from North Iceland to the South over the barren Sprengisandur trail where there was no grass to feed the horses and no habitation nor shelters for humans so it was a great relief to reach the Hjálp area as there they could find a bit of green and feed their horse. To further illustrate how bad this trail was considered Sprengisandur is made up of two words "Sprengja "which means to ride your horse to death and "Sandur " which translates to sand.

The waterfall is located in in the river Fossá in Þjórsárdalur valley a little off the main road, near the junction of road 32 and 326, close to Búrfellsvirkjun Hydro Electrical Power station.
When visiting the area in summer we recommend visiting Háifoss waterfall (fourth highest waterfall in Iceland) further upstream in Fossá river and Gjáin oasis close to the viking longhouse ruins at Stöng.