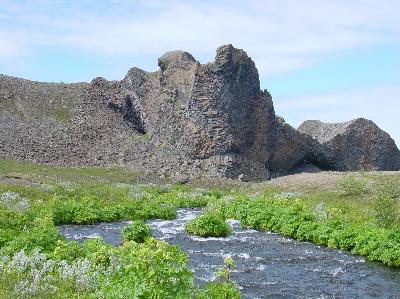 They were once volcanic craters until a devastating catastrophic flood about 2500 - 3000 years ago, swept away all the loose ground surrounding the craters, leaving behind only the solid rock. The flood occurred due to a volcanic eruption beneath the icecap of Vatnajökull when an enormous quantity if ice in the glacier quickly melted. Some of the extraordinary rock formations are standing in the middle of the canyon of Jökulsá á Fjöllum glacial river, called Jökulsárgljúfur. Hljóðaklettar are a part of the Jökulsárgljúfur canyon, a 25 km long canyon of the glacial river. The name of this magnificent canyon means  Glacial River Canyon. Further south and upstream in the canyon are several waterfalls, among them the most powerful waterfall in Iceland, Dettifoss. Hljóðaklettar are located at the northern entrance to Vesturdalur Valley by the river Jökulsá á Fjöllum, the second longest river in Iceland. The river takes its source in Vatnajökull Glacier, the largest glacier in Iceland. Hljóðaklettar or the Echo Rocks derives its name from the echoing sound of the nearby turbulent river, Jökulsá á Fjöllum.

There are many marked and interesting hiking routes through this magnificent wilderness area. After a short hike from the parking lot, you will reach a cluster of rocks, that are water and wind eroded crater plugs with many caves and extraordinary formations of basalt columns. Many of the rock formations in Hljóðaklettar have names and each of them has been given their name due to their appearance and formation. Following are a few of the names:  Kastalinn - the Castle,  Tröllið - the Troll and  Kirkjan - the Church