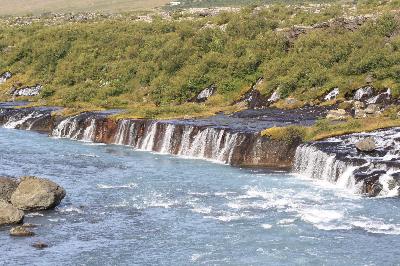 Hraunfossar Falls, situated on road 518 in Borgarfjörður district in west Iceland are small cascades and rivulets issuing from underneath the edge of a porous lava flow called Hallmundarhraun, falling picturesquely into the rapids of the glacial river Hvítá in the canyon below. Hraunfossar Falls are among the prettiest waterfalls in the country and are protected. There is a boardwalk and a viewing platform situated close to the parking lot from where there are fine views over the falls but there is also a pedestrian bridge across the river Hvítá where views are also great.

The river Hvíta is a home to another spectacular waterfall, Barnafoss, that plunges through a narrow channel with enormous power. The name, Barnafoss means the Falls of the Children and stems from an old legend of two children from a nearby farm that drowned when they fell into the river. In former times there was a natural stone arch across the river at the falls. As the story goes, their parents had gone walking to a church, located across the river and the children followed in their footsteps and attempted to get across the river on the stone arch but failed with these tragic consequences. After this happened, their mother had the stone arch destroyed in order to prevent similar occurrences.

A little further inland from Hraunfossar and Barnafoss is Húsafell forest with a lot of summer cottages, an outdoor swimming pool, a campsite and many other recreational facilities. There is also a new hotel at Húsafell. A little further inland is Langjökull Glacier, the second largest glacier in the country.