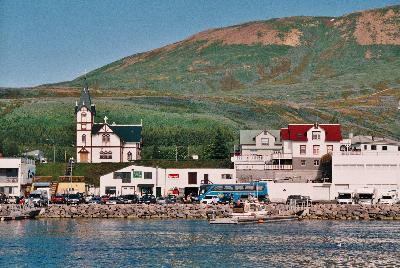 Húsavík Town is located in the north of Iceland on the eastern shore of Skjálandaflói Bay and is a very popular destination with Iceland visitors. In recent years, it has become a center of Whale Watching in Iceland, some even say it is the Whale Watching Capital of Europe. Húsavík inhabits 2500 people and the inhabitants livelihood mainly derives from the rapidly growing tourism in the town and the surrounding area and fishing.

Whales of different species are frequently spotted in the Skjálfandaflói Bay where they can often be seen close up. In Húsavík town is a whale museum, where among many other interesting displays, a skeleton of a Blue Whale can be seen, but the Blue Whale is the largest mammal ever known to have lived on our planet.

There are various restaurants and cafés all unique in their own way, e.g. Gamli Baukur by the harbour which is located in a house which is a replica of a 19th century restaurant in Húsavík. There are also several hotels and guesthouses at Húsavik as well as a good campsite. Húsavík Church, a beautiful wooden church built in 1907 is the most famous landmark of the town. One of the latest additions to many attraction in Húsavík are the GeoSea Geothermal Baths that were opened in 2018. The GeoSea natural baths are a unique natural bath where geothermal water originating from the depths of the earth has been harnessed to create a magnificent bathing experience. The water temperatures are usually 38  40 C. The geothermal bats are located on Húsavík Cape, from where views overlooking Skjálfandaflói Bay is stunning. Several guided coach tours as well as road trips and self drive tour packages, including Húsavík Town can be viewed at www.tour.is