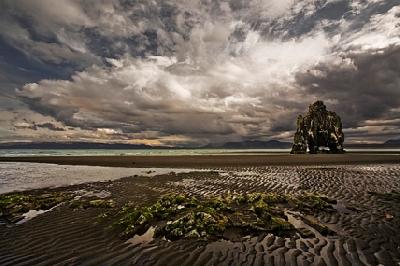 Hvítserkur is a curious gigantic upright rock slab, 15 m high and white with bird droppings. Hvítserkur is located on the shores of the Vatnsnes Peninsula and rises up from the sea in Húnaflói Bay in north-west Iceland. Hvítserkur roughly translates into "White Shirt" and the name comes from being covered in bird droppings. It is said that Hvítserkur was a legendary troll or a monster with intentions to demolish a church nearby, but before it could execute it´s plan the sun rose above the horizon and the monster turned into stone. Geologists have a different theory and believe that Hvítserkur is an ancient crater plug that has been eroded by the ocean waves. It is a very spectacular rock formation and is certainly well worth a visit, especially in summer when birdlife is rich and numerous fulmars and other seabirds are found nesting on the cliff.

Numerous seals are frequently seen from the shores close to Hvítserkur on land or in the water but the area around the Vatnsnes Peninsula is one of the largest colony of seals in Iceland. In the small town Hvammstangi is the Icelandic Seal Center, where information about the seal colony is avalilable as well as boat tour to spot the seals more close up.

There is a rough gravel road that leads to a parking lot near Hvítserkur from where it is possible to view Hvítserkur from above but it is also possible to walk down a rather steep trail to the beach to view it a bit more close up. Guided tour packages as well as several of our self drive tours, include a visit to Hvítserkur and can be found at www.tour.is