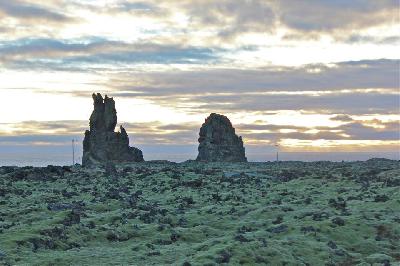 Lóndrangar are a pair of pointy cliffs, rising from the shore of the southern Snæfellsnes peninsula. The taller one stands approximately 75 meters tall. These are crater plugs of basalt, remains of ancient craters that are now slowly being eroded by the sea.

By the side of the main road around Snæfellsjökull, there is a parking lot, as well as a good viewpoint from where there is a good view towards Lóndrangar. In order to see Lóndrangar more close up, it is best to take the road to the lighthouse at Malarrif and hike from there to Lóndrangar. Lóndrangar is a part of Snæfellsjökull National Park and there are numerous places of interest nearby. The National Parks Visitor Center is located at Malarrif.