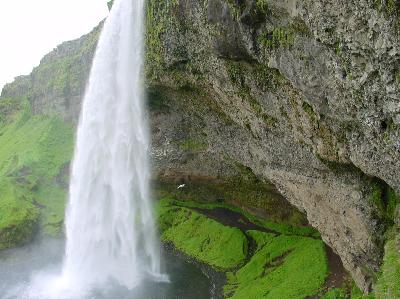 Seljalandsfoss is a picturesque 60 m high waterfall in South Iceland, near the junction of road 1 and 249. Seljalandsfoss is special in the way that one can walk behind it and get different unique perspective. However, visitors are advised to be careful walking behind the waterfalls as the staircase and paths can be slippery, - especially during winter when the water frequently freezes on the path and it´s surroundings. Seljalandsfoss is a very popular attraction and is easily accessible all year round. There is a small campsite close to the waterfall. Fulmars and other seabirds nest in the surrounding slopes and cliffs in summer.

There are several other small waterfalls close to Seljalandsfoss, including the pretty Gljúfrabúi Waterfall, situated only a few minutes walk from Seljalandsfoss, hidden in a small canyon. The road from the main circular highway to Seljalandsfoss is number 249 and leads further to Þórsmörk, a beautiful Nature Reserve, nestling at the foot of the glaciers Eyjafjallajökull and Mýrdalsjökull.

The road from Seljalandsfoss to Þórsmörk is only passable by large four wheel drive vehicles and usually only in summer, as several unbridged rivers must be forded along the route and an extreme caution must be taken when crossing the rivers than can be deep and may have a strong current. The rivers can swell and can become impassable, especially on warm summer days due to melting ice and snow on the nearby glaciers. Heavy rain can also make the rivers grow in volume. Situated on the lowland plains, close to Seljalandsfoss on the west side, there are two low mountains, the smaller is Litli Dímon and the larger is Stóri Dímon. Dimon is a Latin and means two mountains or twin mountains so the names mean Little and Large Dimon. Stóri Dímon was in the past called Rauðuskriður and is known as such in the famous Njáls Saga as the battlefield of a battle fought soon after the time of settlement of Iceland. Stóri Dímon is 178 meters high and to climb it is relatively easy. There are great views from there, over the surrounding areas and towards Þórsmörk and to the offshore Vestmannaeyjar Islands