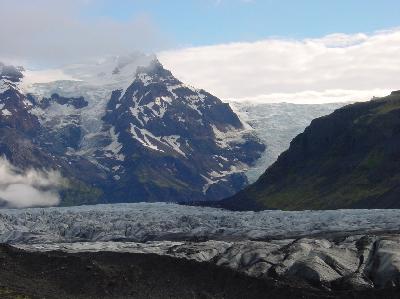 The Skaftafell National Park covers an area of about 500 Square kilometers and was founded in the year 2008. The Skaftafell area has been protected since 1967 and is a part of the larger Vatnajökull National Park. The intense green of the scrub and birch tree clad hillsides contrasts vividly with the white brilliance of Öræfajökull Glacier above, the black outwash sands below and the blue of Atlantic beyond. Dark mountains and peaks and ice-clad summits, forming a soaring majestic backcloth to the wide water veined gravel plains below. Its luxuriant vegetation of low trees and wild flowers make it the startling contrasts of bleak, water veined sands and green-clad brush covered slopes rising up to the glaciated mountains. It is an outstandingly varied area, indescribably lovely and fascinating place. The climate of Öræfi district is one of the mildest in Iceland as the district is close to the south coast and the Gulf Stream and furthest away from the cold influence of the arctic. Walking and hiking paths lead to several panoramic, beautiful and impressive sites.

One of the National Park´s prettiest sites is Svartifoss waterfall. The name means the  Black Falls translated into English. The waterfall lies at the back of a long ravine, enclosed by steep cliffs, where it plunges over an escarpment og intricately formed, regular strands of hexagonal columnar basalt. There is a multitude of other trails through the park.

There is a large Birch forest within the Skaftafell National Park, - Bæjarstaðaskógur. There is an excellent campsite with good facilities at Skaftafell and an information and a Service Station for visitors. There are also several hotels and guesthouses as well as restaurants in the area but Skaftafell and it´s surroundings are among the most popular tourist attractions in Iceland. There are numerous places of interest close to Skaftafell.

Jökulsárlón or the Glacial Lagoon is only about 45  50 minutes drive to the east from Skaftafell, located immediately on road 1, but Jökulsárlón in one of the most visited tourist attractions in Iceland. Jökulsárlón is situated at the foot of Breiðamerkurjökull, which is an outlet glacier from the larger Vatnajökull Icefileld and the largest glacier in Europe. Large chunks of ice or icebergs have broken off the edge of Breiðamerkurjökull and float in the deep lagoon towards the nearby south coast, which is sometimes referred to as the  Diamond Beach to form the beautiful spectacle called Jökulsárlón. The name of the beach stems from chunks of ice that are frequently to be found stranded on the black sand beach and look like diamonds. Jökulsárlón is a part of the Vatnajökull National Park.