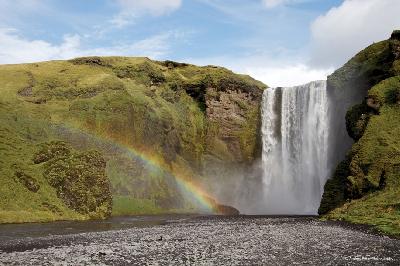 Skógafoss Waterfall is a beautiful 60 meters high waterfall in the river Skógá, at the foot of the Eyjafjöll mountains in the south of Iceland. It is situated close to the small hamlet of Skógar, near the main circular highway, from where the waterfall can be seen. The splendor this waterfall is one of the finest sights in this superbly attractive countryside. The legend says that a chest filled with gold coins was hidden in a cave behind the waterfall by the first settler at Skógar, Þrasi Þórólfsson. On sunny days, a single or even a double rainbow is visible due to the amount of spray the waterfall produces.

The waterfall can be viewed below it from very close up but there is also a long and steep staircase that leads to a observation platform above the waterfall. From the platform above, is the beginning or end of one of the most popular hiking routes in Iceland, Fimmvörðuháls Pass, leading along the river Skógá with its many more waterfalls, between the glaciers Eyjafjallajökull and Mýrdalsjökull and the beautiful Þórsmörk.

In late March 2010, a volcanic eruption started east of Eyjafjallajökull Glacier on the northern part of Fimmvörðuháls Pass, close to the hiking trail. Two craters were formed and are called Magni and Móði. This eruption attracted a lot of visitors as it was possible to watch it quite close up. Less than a month after this eruption began, it was followed by a much greater eruption in the nearby Eyjafjallajökull that created a cloud of ash that disturbed air traffic in most of Europe for many weeks. This eruption eventually ended in October the same year.

Þórsmörk is a Nature Reserve, nestled on the north side, at the foot of the glaciers with lush vegetation. The regional museum, Skógasafn Heritage Museum, situated close to Skógafoss is one of the best arranged in the country, showing implements of agriculture and domestic crafts of bygone days. There is a small campsite situated close to the waterfall. Hotels and restaurants are also to be found at the nearby Skógar hamlet. To the south of the waterfall is Skógasandur, flat lowland sandy plains that reach as far as the south coast and there is an airstrip for small planes on Skógasandur, close to the main highway. Only a few minutes drive further to the east of Skógar and Skógafoss is Sólheimajökull Glacier, which is an outlet glacier of the larger Mýrdalsjökull Glacier. Organized Glacier Walks and Ice Climbing tours are available on Sólheimajökull all year round.