The Settlement Exhibition and The Egil Saga Exhibition 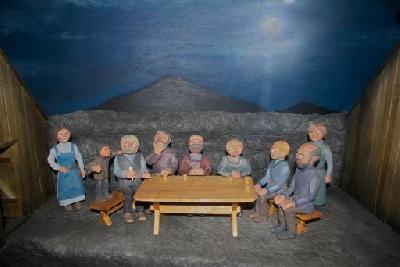 
This exhibition provides an insight into the settlement of Iceland. It tells how the land was discovered, how the Viking sailors conquered the open ocean and why they left their homelands in Norway. It tells of the first men to set foot on the island and how the land was settled up to the establishment of the first parliament in the world, the Althing, at Thingvellir in 930AD.

THE EGILS SAGA EXHIBITION
This exhibition profiles one of the most colourful of all the saga heroes, Egill, the son of Skalla-Grímur Kveldúlfsson. One of the very first settlers, Egils father arrived from Norway just 10 years after the first land had been claimed. The Saga of this familys pioneering and settlement of the Borgarfjörd region provides a brilliant insight in the tumultuous years of settlement. Egil himself is a larger than life hero, an intriguing combination of violent Viking and sensitive poet. The saga is a complex and vibrant intertwining of battles and love affairs, sorcery and pagan lore.