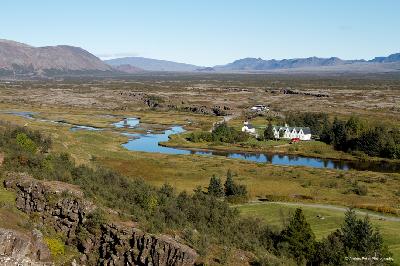 Þingvellir, a National Park since 1928 lies at the northernmost extremety of Lake Þingvallavatn, a setting of exquisite natural beauties. On the western side it is sheltered by imposing sheer rock wall of Almannagjá, east of which, and below Lögberg, along the western bank of the Öxará river lies the actual Þingvellir, - Assembly Plains.

In addition to its historical interest, Þingvellir is of unique geological interest. It lies in a rift valley on a fault zone, or a crack in the earth surface. The Þingvellir depression or rift valley is the result of a violent fault depression, where tectonic movements have ruptured the valley floor, the middle part of which has sunk below its original level, forming the rift valley and the trough for the lake. The rock walls of the Almannagjá rift that end the collapse on the western side and the terminating rifts on the east side are moving apart, a clear dramatic visual evidence of ocean floor spreading and continental drift. Measurements indicate the about 9 km wide rift valley widening by a 2 cm yearly. From the view point at Hakið, the visitor has a choice of walking down the main fissure, Almannagjá, its gaping opening is a continuation of the road which is followed below perpendicular walls.

The Assembly Site of Alþingi

Lögberg "Law Rock" is easily recognizable with a flag pole on the top. The actual site of the Alþingi is the flat plain east of and below Lögberg on the western bank of Öxará river. Lögberg, from which the countries law was proclaimed, is historically the most significant place and with a historical association that almost uninterrupted, encompasses nearly the whole existence of the Icelandic Nation. The parliament held at Þingvellir from 930 to 1798 had both legislative and judiciary power. It was presided over by the Law Speaker who was elected for a tenure of three years. The law speaker directed the proceedings of the assembly and proclaimed the country´s law from Lögberg. The annual session lasted from 10 to 14 days and at times several thousand people assembled, many of whom came on various matter of business with their fellow countrymen, while others came merely for pleasure. During Alþingi´s long history, the proceedings and participation varied from time to time. Öxarárfoss, a picturesque waterfall drops over the fault escarpment enclosed by steep cliffs.