This tour is a fantastic combination of our absolute favorite things to do in Iceland, from the iconic sites of the South Coast and West to hidden treasures and local flavors such as lava caving, Blue Lagoon bathing, traditional tastes and storytelling and, of course, northern light hunting.

Each morning, your tour coach will depart from the hotel after breakfast, and your tour vehicle will generally arrive at your next nights accommodation in the late afternoon. Each day there generally will be no more than 45 minutes to one-hour driving between each tour stop.


Highlights:
 Get the essential overview of Icelands varied nature and culture on this highly rated tour
 Snap memorable pictures of famous wonders such as Kirkjufell, Geysir, Skogafoss, the Glacier Lagoon and the Blue Lagoon  Hunt for the Northern Lights in optimal rural locations
 Enjoy the insights and lively commentary of our knowledgeable local guide 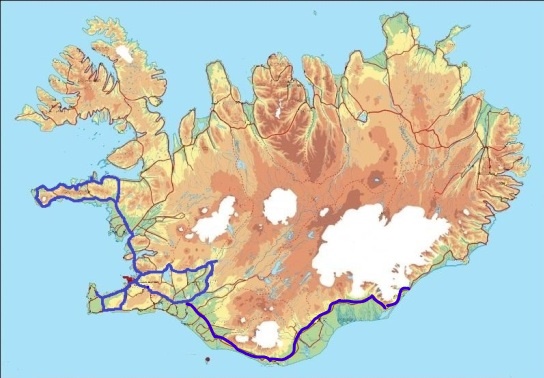 Upon arrival in Keflavik International Airport, head through passport control, collect your bags and go through customs to the Arrival Hall. Airport transfer is not included, but we are happy to help you arrange shared or private transfers.

Once in Reykjavik, check into your hotel. If you arrive early in the day, you might want to explore Reykjaviks old town area, location of many museums and galleries. You might also enjoy visiting one of the citys outdoor geothermal swimming pools where you can shake off your jetlag. In the afternoon you could take one of our day tours, such as whale watching or horseback riding, both bringing you close to Icelands nature and landscape.

Dinner is on your own. Reykjavik offers a multitude of restaurants and/or coffee-houses, making dinner a great way to get better acquainted with Icelands capital.

Tonight will be an information meeting (around 18:00-6:00pm) for people in the group to meet each other and to learn more about the tour.

Breakfast at your hotel. Meet your local guide in the hotel lobby.
Depart Reykjavik with your guide and start your trip. Before leaving the city you will have the option to visit the interesting Aurora Reykjavik center, where you can learn about northern lights and get tips for taking photos of auroras. (Admission not included but is paid on the spot). Travel northwest via an undersea tunnel through Hvalfjordur (Whale Bay) on your way to the rugged coastline Snaefellsnes Peninsula.

Known as Iceland in a Nutshell this area will show you an astonishing variety of natural landscapes that can be seen in Iceland, but in one area. This is part of the remote and tranquil Snaefellsjokull National Park, named after the peninsulas magnificent glacier-crowned volcano (last eruption: 250 AD). The mountain is said to be protected by a benevolent spirit, and youll surely feel recharged as you drive through this beautiful park.

Youll visit secluded and charming fishing villages as you head along the northern peninsula. View Icelands most photographed mountain, Kirkjufell, and its surrounding fjord teeming with herring and orca whales. In nearby Grundarfjordur village, youll meet a local storyteller in his home for some funny insights, facts and fables about the Icelanders.

Continue along the coastline, making some amazing stops to admire columnar basalt formations and the crashing waves of the North Atlantic. The afternoons highlight a visit to the spectacular Vatnshellir, an 8000 year-old lava cave located at the foot of the mystical Snaefellsjokull glacier. An expert cave guide will show you the amazing and beautiful features of Vatnshellir. The road then leads to the Borgarfjordur, a scenic and historical area of West Iceland

Dinner and overnight in Borgarnes, a charming town that has connections to one of Icelands most famous Sagas.

If weather conditions are favorable tonight, you may head out on foot with your guide to search for the elusive Aurora Borealis in the area of your hotel. Otherwise, the northern lights hunt would be on another night of your tour (subject to weather conditions)

Breakfast at your hotel before heading on to the famous Golden Circle route. Icelands Golden Circle showcases a trio of celebrated natural attractions. Start with a visit to Thingvellir National Park (a UNESCO World Heritage Site), where Viking settlers established an annual assembly in AD 930. This parliament has now become the worlds oldest ongoing. Thingvellir is also a geological masterpiece, as it marks the visible site of the mid-Atlantic Ridge where the North American and Eurasian continental plates meet. You can walk along a path taking you between the canyon marking the location of the ridge.

Head through scenic farmlands to the celebrated Gullfoss waterfall, believed by many to be Icelands most beautiful falls. Nearby is the Geysir Hot Spring Area, alive with boiling mud pits, steam vents, and exploding geysers. The most famous of these is Strokkur, a high-spouting geyser that erupts every ten minutes.

As a local and cultural treat today, youll stop at tiny Laugarvatn village for a taste of traditional hot spring bread that has been cooked in the warm ground by geothermal hot springs.

Overnight and Dinner in the South Coast area.

Breakfast at your hotel. Drive along the iconic South Shore , an area of Iceland that is beautiful to view in the winter. This is one of the main farm regions of the country, and the road will pass by typical Icelandic farms, often with Icelandic horses in the fields. Depending on the weather, you might also get a glimpse of beautiful Mount Hekla, Icelands most frequently-erupting volcano. South Iceland is home to the LAVA Center, an interactive, high-tech educational exhibition depicting volcanic activity, earthquakes and the creation of Iceland over millions of years. Enjoy both the exhibit and viewing an interesting film about Icelandic volcanoes at the Centers cinema. As you travel onwards, you might get a glimpse of Eyjafjallajokull, the famous ice-capped volcano whose 2010 eruption halted air traffic worldwide.

Stop at two spectacular waterfalls, each with its own charm and character. Depending on the trail conditions you can walk behind Seljalandsfoss. Skogafoss is one of the countrys most photographed waterfalls and is said to be the hiding place for ancient treasure.

Head onwards, passing over Eldhraun, the surreal and vast lava landscapes that were created in one single flow  the largest known in history.

You will start seeing views of glaciers as you head into the southeast Iceland, and the region of Vatnajokull, Europes largest glacier.

Breakfast at your hotel. Today youll be in the southern area of Vatnajokull National Park, named after Europes largest glacier. The entire park covers almost 14% of Icelands landmass, and its considered the largest national park in Western Europe.

Start with a visit to Jokulsarlon Glacial Lagoon where you can enjoy the breath-taking sight of icebergs floating in the deep glacial waters. With luck, you might also see seals relaxing in the area. Nearby, is the stunning Diamond Beach where crystal clear remains of icebergs linger on the black sand before disappearing into the ocean. Then visit the national parks famous Skaftafell area, a beautiful fire and ice region created by volcanic activity and ringed by many glaciers. This is the home to Svinafellsjokull, one of the most beautiful of the glacial outlets emerging from Vatnajokull.

Head west, passing through vast sand plains created by glacial outwashes as you head east. The road leads to Vik, Icelands southernmost village. Visit Reynisfjara beach, where you can take a walk on the black sands, admiring the extraordinary rock formations and thundering waves of the Atlantic Ocean.

Breakfast at your hotel. Today youll take a beautiful coastal road that leads onto the breath-taking Reykjanes peninsula. Reykjanes was designated a UNESCO Geopark in 2915 because of its many interesting geothermal and volcanic features, and its a fantastic place to explore.

Visit Strandarkirkja, a pretty wooden church typical of those in rural Iceland. There is a long-standing tradition that prayers in the church have helped provide luck and success to fishermen working on the dangerous seas in the area. The small church is built right into the coast with amazing views of the turbulent ocean waves meeting volcanic rocks and black sands. Look for a quaint set of painted elf houses nestled in the church grounds.

Drive to Lake Kleifarvatn, set in fascinating, stark, moon-like surroundings. This lake was the setting for a popular murder mystery, The Draining Lake, by renowned Icelandic author Arnaldur Indridason.

Near the lakes southern end lies Krysuvik, where powerful jets of steam escape from deep below the earths crust and sulphurous steam rises from numerous geothermal vents. You can see numerous small hot springs, brightly-colored mud pots, boiling pools and other types of geothermal activity. Continue under low mountains along the shoreline to stop by craggy cliffs rising sheer from the sea. This is home to Grindavik, a town with a sizeable fishing fleet. After a lunch stop in Grindavik (lunch is on your own), head for the world-renowned Blue Lagoon. Set in a black lava field, this geothermal spa is a lagoon filled with warm mineral-rich seawater that provides the ultimate interaction and relaxation with Icelands raw nature.

Here you can enjoy a lovely soak in the healing waters of the lagoon a unique wonder of nature with pleasantly warm, mineral-rich water in the middle of a black lava field.

Return to Reykjavik, where the evening is open to enjoy the lively capital of Iceland.

Overnight in Reykjavik. Dinner is on your own.

Breakfast at your hotel. Please note that this might be a light breakfast if you are taking an early morning flight. Transfer on your own to the international airport for your departure flight. The airport transfer is not included, but we are happy to help you arrange shared or private transfers.

We recommend you depart your hotel no later than three hours before your departure flight. We wish you a pleasant trip back to your homeland and hope to see you in Iceland again!

Activity/Difficulty Level: 2 out of 5 (Easy)


Important:
 Day 2- Visit to Vatnshellir cave: You should be reasonably fit to participate, able to walk up and down a stairway equivalent a 2-3 story building and able to walk on uneven surfaces. We recommend bringing a pair of gloves to use in the cave.
 Please note that northern lights are dependent on weather conditions. Sightings cannot be guaranteed.
 Note: We reserve the right to alter routes without prior notice, due to road conditions. Note that hotel list is subject to change.


New for Winter 2020  2021:
 As part of our pledge to preserve Icelands fragile nature, all our escorted tours include carbon offsetting through Kolviður, the Iceland Carbon Fund (ICF).

We are pleased to offer our guests on escorted tours a 20% discount on each of the following amazing experiences in Iceland.
1. A 20% discount on Perlans renowned Wonders of Iceland exhibit by showing this document (printed or electronic) on the spot. Perlan is an amazing experience. You can walk through a real ice cave, feel the power of volcanoes and earthquakes, view a realistically constructed bird cliff and ocean wonders and learn about northern lights at a planetarium show.
2. A 20% discount on admission to the exciting FlyOver Iceland Enjoy an amazing simulated flight experience over Icelands natural wonders. A free FlyOver Iceland shuttle is available from select bus stops.

Accommodation:
This tour stays in comfortable hotels with private bathrooms, generally a mix of quality and comfort level hotels. Most of the groups stay at the following hotels.
Please note this is an advised hotel list and subject to change.

Send us an inquiry