What Are the Westfjords? Discover Iceland's Hidden Gem

Most people who visit Iceland do one of two things: they either stay mostly in and around Reykjavik or they drive Ring Road. The latter is often what people think of when they think "Iceland vacation".

Believe it or not, they're missing out. Indeed, there's a beautiful part of Iceland that you will completely miss if you "just" drive Ring Road. This isn't to say that the classic Ring Road tour is bad, but that there's a chunk of the island which isn't covered: the Westfjords.

What Are the Westfjords?

The Westfjords are a peninsular that sticks out from the northwest of Iceland. The geologically oldest part of the island, they are the only place that can't generate all its power (and then some) by geothermal energy. This is one reason why the Westfjords remain sparsely populated even by Icelandic standards. In fact, per the 2007 census, the entire area had a population of less than 8,000 people. Like most of Iceland, it is inhabited along the coast, with pretty fishing villages. The largest town is Ísafjörður, which hosts some of Iceland's largest festivals.The Westfjords, being remote, are great places to view wildlife and enjoy the backcountry. 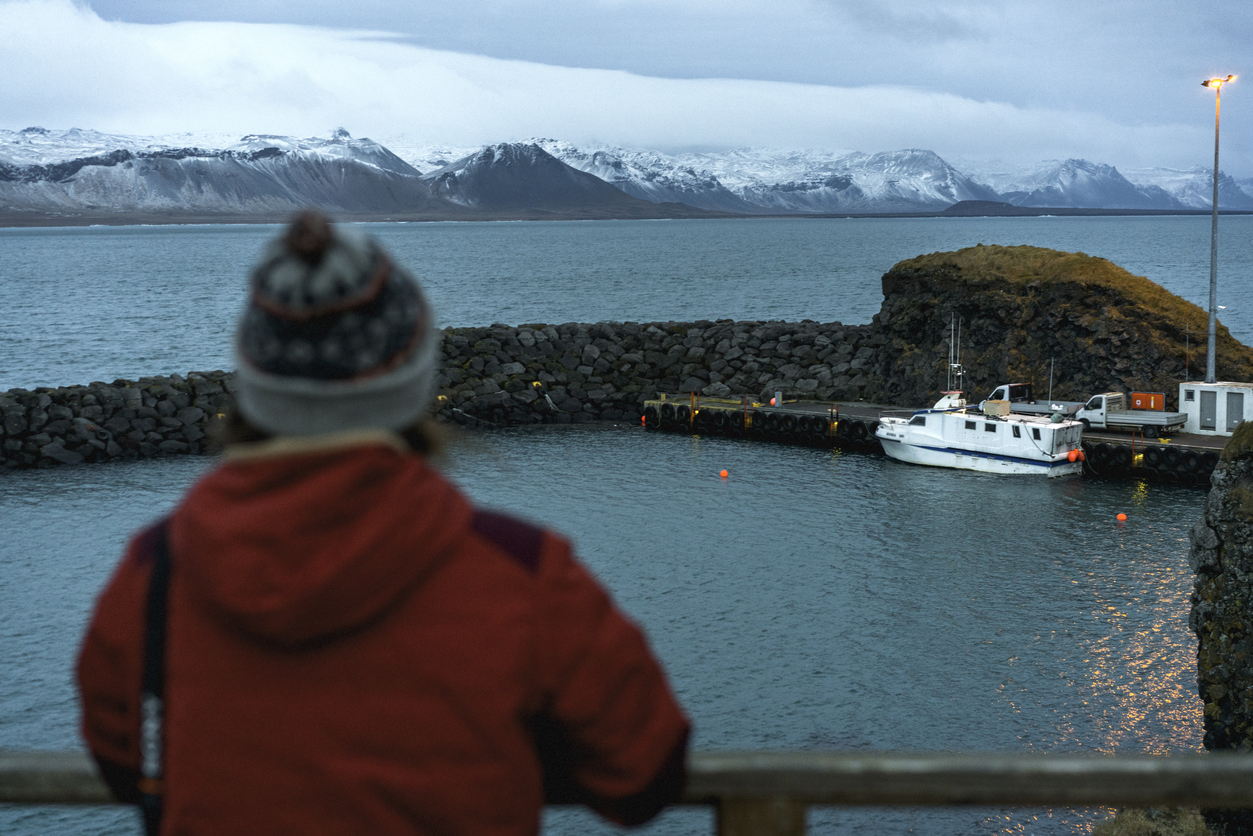 Getting to the Westfjords

There are flights from Reykjavik to Ísafjörður and the flight time is about 40 minutes. However, flying to Ísafjörður means you don't get to enjoy any of the wonderful scenery in between. Thus, unless you are in a hurry to get to Ísafjörður, renting a car is the way to travel. Because the roads in the Westfjords are not as well maintained (due to the low population), we strongly recommend that you rent an SUV. Suddenly finding yourself on an unpaved road is a thing.

There are two primary ways to drive to the Westfjords. You can either take Ring Road north from Reykjavik until you reach Highway 60 and turn left (north) towards the isthmus. If you are combining the Westfjords with the ring road and approaching from north Iceland, instead turn right on Highway 68 towards Borðeyri. Route 60 will take you up the west side of the isthmus and Route 68 up the east. There's a connection between the two at several places but we only recommend Route 59 between Búðardalur and Borðeyri and Route 61 between Króksfjörður and Hólmavík.

The second route is to drive to Stykkishólmur and take the car ferry to Brjánslækur. The trip takes about two and a half hours and comes with fantastic views. This will drop you on the southern side of the Westfjords and you can then drive north to Ísafjörður through beautiful terrain.

You can do a self-guided fourteen-day tour that will take you around the ring road and the Westfjords. This route brings you to the beautiful Snæfellsjökull National Park and then Stykkishólmur taking the ferry from there onto the Westfjords The tour includes accommodation, ferry tickets, and a GPS (believe me, you want a GPS in the Westfjords instead of using google maps as there are some blind spots in the 3G/4G connections ).

Things to See and Do in the Westfjords

The Westfjords have a number of can't miss attractions as well as simply enjoying the wonderful scenery and escaping from the crowds:

Reykjavik isn't quite far enough north for the midnight sun in June. The Westfjords are, so if you want to experience this phenomenon. In February (although it can be hard to drive there then) they throw a massive party to welcome the sun back. Stay up late and enjoy a picnic dinner.

The arctic fox (Vulpes lagopus) is the only terrestrial mammal native to Iceland. You can find out all about it at Melrakkasetur, the Arctic Fox center, in Súðavík. The center has an exhibition and can give advice on finding the elusive foxes in the wild.

Ísafjörður is a real town that even has its own university. It has a variety of restaurants and is the nearest thing to "civilization" you'll find. It also hosts music festivals, the mud-soccer European Championships, and a runners' festival. Ísafjörður is the gateway to Hornstrandir Nature Reserve, and ferries depart daily in summer.

You can't drive to, or into Hornstrandir Nature Reserve. The only way to get there is to take a ferry from Ísafjörður. Hornstrandir is a true wilderness reserve, so you must follow Leave No Trace protocols if visiting. There are no services for visitors and no cell phone reception, so it is not recommended that people with physical limitations or conditions that might result in sudden medical emergencies. There is one small guest house, but most visitors camp at designated campsites. A GPS unit is recommended. The best way to hike Hornstrandir is with a guide. It's not a place for people who love their creature comforts, but is a fantastic wilderness that anyone of reasonable physical fitness can appreciate.

The Westfjords have some of the best bird watching in the world. Go to Látrarbjarg cliff, which is the largest bird cliff in Iceland and one of the largest in the world. Watch out for the puffins  they have no fear of humans and will come right up to you to be photographed. It's a great place to get amazing closeup photos that will have people thinking you put in a lot more effort than you did. Be careful by the cliff edge, though...people have been known to put their foot in a puffin burrow and take a tumble which could result in disaster. In the south parts of the Westfjord, look for white-tailed sea eagles, which are one of the largest birds of prey and the largest wingspan of any eagle which can be upto 2.45m / 8ft.

Dynjandi is one of the most spectacular waterfalls in Iceland...but you might be lucky and be able to share it with nobody. It's a series of stepped falls that total over a hundred metres high. And the hike to it leads you past a bunch of other cute little waterfalls.

The colored beach of Rauðasandur is known for its beauty. Oh, and it's right beneath those cliffs I mentioned, so you can go watch birds, then head down onto the beach for a picnic. You may want to bring waterproof boots (even in summer, it's seldom warm enough for bare feet and there are streams crossing the beach). In the past the beach has hosted a huge music festival under the midnight sun. The road is pretty steep so not recommended for people that dont like heights

Weather permitting, seeing the Westfjords from a boat will give you a completely different set of spectacular views. It's a great area for sea kayaking, but if you'd rather something more leisurely it's easy enough to charter a fishing boat (with or without actual fishing) or take a whale or puffin watching trip. Make sure you listen to the locals about the weather and tides, though. This is a great way to see the deepest of the fjords.

Bolafjall Mountain offers some of the best views in Iceland. It's accessible by steep gravel road from Bolungarvik, and you can park at the radar station. The station is used by the Icelandic coast guard. Before or after, stop in Skálavík for coffee and a walk on the black sand beach.

Driving along the coast road in the Westfjords will take you to a variety of beautiful fishing villages. Drangsnes is one of the most interesting. You can take a 10-minute ferry ride to Grimsey for, yes, more puffins and other seabirds. You can also enjoy the swimming pool or, better yet, hot tubs with an ocean view.

Hvitanes is a pit stop on the road between Hestfjörður and Skötufjörður. It's actually Iceland's most easily accessible seal colony. Indeed, there are rocks just meters from the shore on which harbor seals hang out. The farmers there have provided a car park and will loan binoculars if you didn't bring your own (why didn't you?). A great place to stop, eat lunch, and watch these adorable animals. 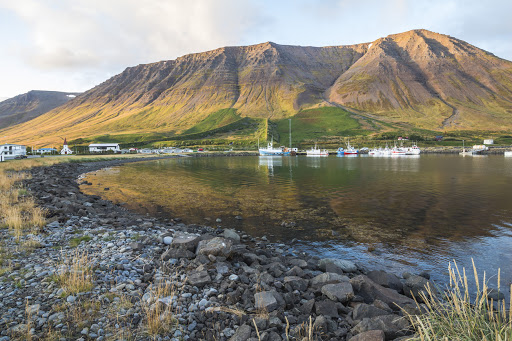 Some roads are actually very good, and some of them...well...are more potholes than road. The road may go from pristine asphalt to dirt without any warning whatsoever. If you plan on exploring the Westfjords, you may want to rent an SUV. (Don't forget that offroading is illegal in Iceland). You should also rent a GPS unit; cell phone coverage is not always reliable. Don't forget a hand GPS if you plan on hiking.

Take binoculars. You will regret it if you don't. A telephoto lens for your camera is also a great idea. Avoid going to the Westfjords in winter unless you have a specific reason. The roads aren't always clear, and if you must go in winter, go on a guided tour. However, going in the fall gives you a decent chance of seeing the Northern Lights.

Distances can be longer than you expect because you're driving around all of those fjords. Avoid driving at dark.

Learn More About the Westfjords

The Westfjords are an absolutely awesome place to visit and quite different from the rest of Iceland. If you have been to Iceland before and are considering a repeat trip, then consider the Westfjords. If it's your first trip and you have more time, then include them in your trip. You will see things that are often reserved for locals.

To find out more about guided tours of the Westfjords and get more tips on exploring this wonderful, remote part of Iceland, contact Tour.is today.