One of Iceland's most majestic and awe-inspiring attractions is its variety of ice caves. People visit these formations formed solely by natural forces or with some assistance from man every year. If you are planning to visit Iceland for your next vacation - and especially if you're coming during the winter - then you should definitely consider taking out some time to absorb these wondrous sights before going home.

The following information provides a helpful overview for visiting Iceland's ice caves and answers some common questions that newcomers have. Remember, when you book a tour through Tour.is, you can always rely on our friendly travel experts to give you guidance and advice on how to make the best of your stay in the "land of fire and ice".
The post includes the following:

- What are ice caves?
- Formation
- Why is the glacier ice blue?
- Which season in Best for a tour?
- Where can you find ice caves in Iceland?
- Map of Ice cave tours meeting points
- Which ice cave is the best?
- Can you visit an ice cave without a guide?
- What should you wear and what to bring during an ice cave tour?
- Ice Cave Tours from Reykjavik.
- Ice Cave and Self Drive Tours
- Conclusion 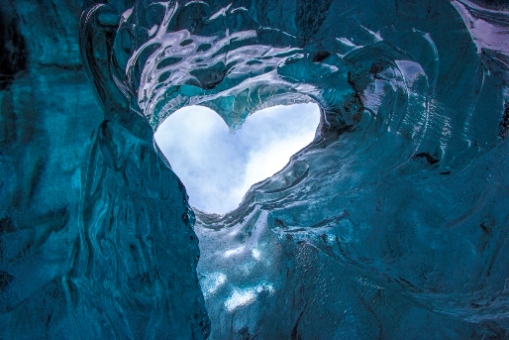 Perfect heart formation inside an ice cave in Vatnajökull Glacier.

What Are Ice Caves?

As the name makes clear, ice caves consist of (or at least contain large quantities of) ice. Simple, right? However, it's important to note that there are actually two types of ice caves: glacier ice caves, and rock ice caves. What's the difference?

You may be wondering what's the scientific explanation for the formation of ice caves. Again, it depends in part on whether we're talking about glaciers or rock caves.

In glaciers, ice caves are formed by melting water that runs under or through the glacier. Over time, this water melts the ice over which it travels, leaving behind ever-widening passageways. During the summer, the warmth from the sun melts the glacier's surface ice, forming holes and crevasses that often descend into caves.

Other ice caves are formed by geothermal activity (water flows or hydrothermal rivers). In either case, the solid perimeter of ice or rock is penetrated by water which creates large openings in its wake. As you can imagine, some ice caves are easier to access than others!

Why is the glacier ice blue?

The ice in glaciers is formed when new layers of snow are continuously stacked on top of old layers of snow or partially thawed ice crystals from the year before. Compressing the snow crystals under this heavy load binds them together and turns them into dense ice. Because the ice is so dense it absorbs may colors of the visible light spectrum such as red light, which has a long wavelength while scattering the colors with shorter wavelength such as blue light, making the blue colors more prominent in the ice.

Which Season Is Best for a Tour?

This probably won't come as a surprise to you, but winter is the best season to visit Iceland's ice caves. Winter in Iceland generally runs from October to April (some say November to March).

While there are a couple of ice caves you can visit throughout the year, it's probably not a good idea to try an ice cave tour during the summer. This is especially true if you want to visit glacier ice caves. During the warmer summer months, more meltwater flows through the glaciers, causing more glacial movement and instability. For reasons of safety, you should only attempt to visit glacier caves during the cold winter months, when they are firmly "set" in place. There are exemptions like the Katla Ice Cave but generally speaking winter is when you would like to go.

Where Can You Find Ice Caves in Iceland?

There are several locations spread across the Nordic island that feature ice caves, and no doubt many locals can recommend their favorite spot to you. That being said, three of the most popular ice caves in Iceland include the Breiðamerkurjökull Cave (aka "Crystal Ice Cave"), the Katla Ice Cave, and the Langjökull Ice Cave. Thes ice caves are all accessed from South Iceland, the crystal ice cave in Breiðamerkur jökull glacier being furthest to the east and therefore furthest from Reykjavik while the Icecave at Langjökull is farthest to the west and closest to Reykjavik.   At the western part of Langjökull glacier you will also find a man made tunnel dug into the glacier and it is accessible all year. However this post mainly focuses on the naturally formed  Ice Caves 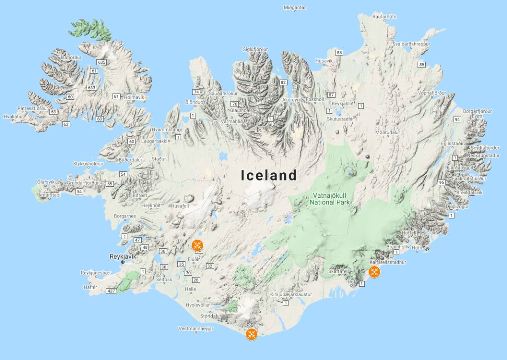 Ice Cave tours meeting points in Iceland on a map.

The Crystal Ice Cave is perhaps the most popular and well-known ice cave in Iceland and attracts scores of visitors from around the world on a yearly basis. It's located in Vatnajökull National Park, which covers a large portion of central and southern Iceland. (Vatnajökull itself is a massive glacier, covering about 8% of the entire island!)

Crystal Ice Cave is positioned near the southern edge of Vatnajökull. It can typically be found in the same vicinity year after year and can hold up to 100 people at a time. The name "Crystal Ice Cave" comes from its lustrous, shiny, and transparent ice interior. The inside of Crystal Ice Cave greets visitors with a mesmerizing array of blue, turquoise, green, and black colors, and is a great choice for taking pictures of your Icelandic journey.

The Katla Ice Cave is quite a bit closer to Iceland's capital, Reykjavik, than Crystal Ice Cave. It is located within the Kötlujökull Glacier. Katla volcano, one of the most well known on the island, has played a part in forming  this cave giving its interior a unique feature: pitch-black ash from centuries of volcanic eruptions trapped within the ice.

The Langjökull Ice Cave is the latest natural ice cave to be discovered in autumn of 2021. It is a large cave compared to most others and with translucent blue ice combined with white, it is truly amazing. To get there you either need to take a ride in a glacier monster truck or snowmobile from the glaciers edge to the amazing ice cave which just adds to the adventure.

Man made ice tunnel at Langjökull

The Crystal Ice Cave, Katla Ice Cave and Langjökull Ice Cave were all formed by natural forces over the course of years. However, there's also a man-made ice tunnel you can explore during your stay in Iceland: the Langjökull Ice tunnel, located inside the Langjökull Glacier. This is reportedly mankind's largest man-made ice tunnel, and it allows you to walk almost 600 meters (1,970 ft) into the glacier.
Since Langjökull is man-made (and also maintained by people), you can visit it throughout the year (yes, even during summer).

Which Ice Cave Is the Best?

Many people ask this question, and the answer is (like most things in life): It depends. All three of the caves mentioned above have their own unique beauty and majesty, and all three are worth your time. In the end, which cave (or caves) you end up visiting will largely depend on how much time you are able to spend in Iceland, and what other things you might want to do or see.

With that in mind, here's some helpful information you should keep in mind about each cave:

Can You Visit an Ice Cave Without a Guide? 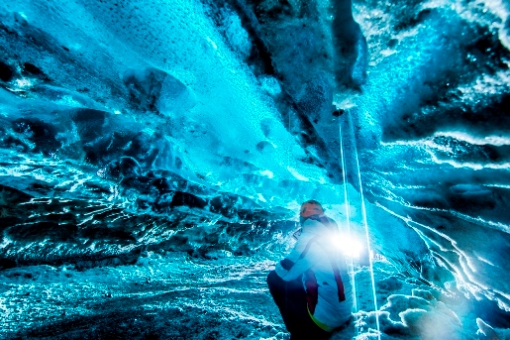 Ice caves can be easily affected by weather conditions, and glacier ice caves, in particular, may be unstable during certain times of the year. In addition, some ice caves may contain hazards that experienced guides are aware of, but that are unknown to you like locations of crevasses in the ice or unstable ice.

Some ice caves don't appear in the exact same spot each year. In fact, some ice caves disappear the following year, while new ones appear in different locations! For these and many other reasons, we recommend that you only take a guided tour of the ice caves.

If you visit an ice cave during winter, you'll obviously want to wear several layers of warm clothes. Even in summer being close to the glacier can make the air temperature go down considerably, you should consider wearing clothes like:

Your tour guide ensures that you wear a helmet during your time in the ice cave's interior. Your guide may also provide you with spikes if the pathway is exceptionally icy. If you want to take pictures of your visit, consider bringing along a tripod on which to rest the camera of your choice (especially if you want to take long-exposure shots in the cave).

For those staying in Reykjavik and don't have a car we offer a few Ice cave tours including pickup in Reykjavik.
If you are looking for some excitement along with a tour of a ice cave the Langjökull Snowmobiling and Ice Cave is truly a great experience.

If you have very limited time in Iceland but would like to see the Ice Caves of Vatnajökull along with the Diamond beach, black beaches of the south costa and if you are lucky the northern lights you can go on a Private Ice Cave and Northern Lights Day Tour. The day tour is very long so staying one night along the way and do a two day private tour of the south coast and a visit to the ice cave is less hectic and gives you more time to enjoy other sights on the way. 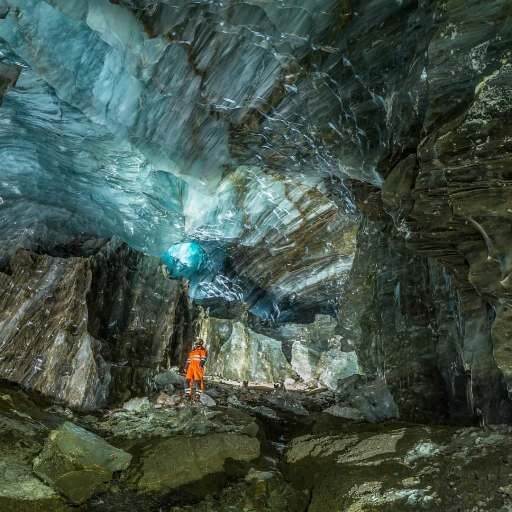 Ice Cave and Self Drive Tours

An ice cave experience can be added to our self drive tours around Iceland. Which ice cave you should choose to visit and what particular tour to choose depends on at what time of year you plan to arrive, how much time you have, your fitness level, what other places you want to see and activities you want to take part in along the way. We can help you figure all this out when booking a self drive tour with us. We also offer personalized self drive itineraries if our tried and tested itineraries on our site don't fit your plans.

The main benefit of adding a ice cave tour to a self drive package rather than doing a private tour is the lower price. Comparing self drive to guided group tours the benefits are that you will have a lot more flexibility on a self drive tour and it is more up to you on where and for how long you want to stop along the way.

At the end of the day, you'll be very glad that you visited Iceland's majestic ice caves, and enjoyed a once-in-a-lifetime experience amidst the elegant beauty of the island's glacial formations. Consider making one or more of the ice caves discussed above a stop on your itinerary!

If you'd like to learn more about Iceland's ice caves, and how you can fit them into a well-rounded, satisfying tour of the "land of fire and ice", reach out to our team at Tour.is today. We'd be happy to answer any questions you have. We look forward to helping you enjoy your visit to our beautiful country!