A Guide to the Volcanic Eruption in the Reykjanes Peninsula, Iceland 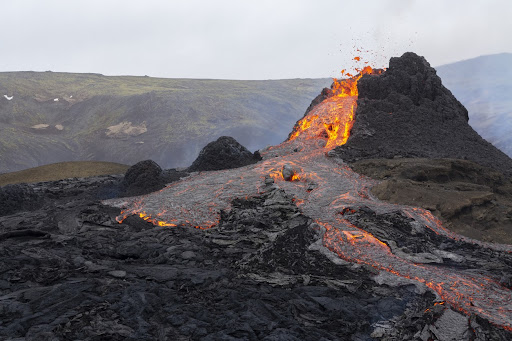 The red skies, explosive magma, and gleaming deep reds of flowing lava are a spectacular sight to behold, especially in person. The recent explosions from the crater on Mt. Fagradalsfjall, on the Reykjanes Peninsula, have attracted hundreds of volcano enthusiasts. Since the eruption is conveniently located near the Iceland´s capital, Reykjavik, taking a hike up to witness this spectacular act of nature is only fitting. If you're ready to travel to the land of fire and ice, here's what you should know about this recent volcanic eruption.

Iceland Eruption After Years of Dormancy

After 15 months of continuous earthquakes near the mountain, the first eruption in the Reykjanes Peninsula happened on March 19, 2021. The area was previously dormant for an estimated 800 years, until now. Around 8:45 p.m. on the first eruption day, Icelanders witnessed an incandescent splatter of molten lava in the distance.

Since then, the Iceland volcanic eruption has grown in size. There are now six vents along the same fissure the eruption began. Experts warn the eruption will continue to grow in size. While this is spectacular news for any hiker, it also means that caution is necessary around the explosions.

The best time to witness the volcanos is at night. The cover of darkness provides an excellent backdrop for the orchestra of lava flowing out of the vents. Better yet, your photographs will look better.

Fortunately, the eruption site is accessible to visitors, which means you can also join hundreds of enthusiasts gathering to watch nature's wonders during a pandemic. It's much-anticipated action and one that's incredibly appealing to any hiker. In line with this, officials at the site have created  designated hiking paths for visitors.

On March 19, the first eruption happened on a mountain called Fagradalsfjall. This point is approximately 6 miles (10 km) from the closest town and about 25 miles (40 km) from Reykjavík. The short distance means that hikers can witness the volcanic activity upclose. Volcano experts believe that the explosion is of the basalt family because many Iceland eruptions follow a similar pattern.

According to geologists, the magma is flowing from the mantle, at least 12 miles (20 km) deep from the earth's surface. The lava flow is consistent, which suggests that that eruption could continue for a long time. The speed of the eruption also means that the source has a similar flow of magma. In summary, if the inflow and outflow are similar, the eruption could occur over time.

Reykjanes hasn't experienced an eruption in hundreds of years. However, in 2019, the Reykjanes Peninsula became a common site for earthquakes. Residents in the nearby town of Grindavík had several troubling nights on account of the earthquakes. The activity around the area suggests that geologic rifts in the peninsula pulled apart rapidly and created a rift that magma rushed to fill.

On March 3, seismologists recorded acoustic signals between the mountain Fagradalsfjall and the fissures where the eruption began. However, the signals disappeared. The dyke (of magma) oscillated between the northeast and southeast parts of the peninsula and started forming cracks. It's believed that the elastic crust in Iceland allowed the magma to penetrate the earth's crust without causing violent fractures.

Experts speculate that the mantle found a straight exit through the crust and to the earth's surface. As such, the eruption is classified as a caldera rather than a crater. This means that the flow of lava could be steady and long-lasting. Geophysicists estimate that the current magma is 2,170 degrees Fahrenheit (1,190 degrees Celsius) hot. Already, dare-devils have taken advantage of the heat and grilled hotdogs and marshmallows.

A webcam captured the first signs of volcanic activity. The Coast Guard picked up the signal and dispatched a helicopter to the site to investigate. The dispatch team was greeted by embers of lava spewing into the sky. The initial fissure was initially 1,650 ft (500m) long but has grown in complexity as more vents emerge.

On November 24, 2021 experts said that the eruption in Fagradalsfjall is over for now. The volcano had not emitted fresh lava since September 18. The volcano was active form March 19 - September 18 with a lava flow of 151 million m3 and covering an area of 4.8 km2

How to Hike to the Lava Field

Hiking to witness the volcanic activity in Geldingadalir at Reykjanes Peninsula is a once-in-a-lifetime opportunity. The walk isn't dangerous or extremely hard but requires careful planning. As with all Iceland explorations, you need to consider the weather. It's best to go exploring with light winds and clear skies. Aim for wind speeds averaging around 20 mph. Hopefully, the wind will flow north, which is your hiking direction. The safest areas are along the caldera and the craters. It's important to avoid the valleys and areas of concentrated smoke.

With this in mind, grab a map and point out road nr. 427 (Suðurstrandarvegur)- this is the beginning of your hiking trail. It's 2.2 miles (3.5 km) to the active volcano. Your starting point is approximately a ten-minute drive east of Grindavík. However, you cannot park on the roadside.

Fortunately, there are parking areas 0.6-1.2 miles (1-2 km) away. You'll have to cover this distance on foot, so add one extra hour to your hiking time. The trail is clearly marked and flows over gravel, rough terrain, and lava. Your elevation is approximately 136 miles (220km), which is a decent challenge for any hiker.

From the parking lot you can take a short hike to the newest Lava Field in Nátthagi. This only takes about 30 minutes each way.

The first section of the hike goes through a lava field and is relatively straightforward. The second stretch of the hike goes along the west slope of Mt. Borgarfjall before joining the third stretch on the slopes of the same mountain for an elevation of 330 ft (100m). The fourth portion of the hikes covers another slope that's also 330 ft (100m) to mount Fagradalsfjall. The last position of your journey is 2 miles (3.6 km) long but finally leads you to volcanic eruptions.

Equipment to Bring to the Reykjanes Peninsula

Maps are already available online for download. You can also download GPS tracks to guide you through the journey. It's also essential to check for weather updates before hiking. While the hike in itself isn't strenuous, the unpredictable weather and the gear complicate things. It's best to carry hiking shoes that can handle the rough terrain. Warm clothing and water-resistant jackets are compulsory. It's also great to include a pants top layer and a hiking pole. As with all other hikes, remember your essentials- a safety kit, GPS, water, and food will help you get through the trip.

Pack all your items in a waterproof bag and pack them before the journey to ensure they fit. As a general rule of thumb, it's also great to try out any new equipment, especially shoes, before hiking. It's crucial to note that the GPS signal is feeble in the area. As such, it's vital to carry a fully charged phone and a power bank.

Even if you're not lost, a fully charged phone can help you receive weather alerts. As a precaution, remember to place your phone in inner pockets during the hike to avoid draining the battery due to cold temperatures. A full battery will also come in handy during your photo sessions. However, it's always best to have a camera to capture every moment.

If you're in shape, you can expect to reach your destination in 3-4 hours. The viewings mostly close between 21:00 and 23:00, which gives you adequate time to observe the volcano in daylight and at night. Remember to also account for the time (around 3-4 hours) to hike back to the parking area after volcano viewing.

Since you're traveling to a landscape, a telephoto lens is your friend. Two lenses, measuring 14-24 mm, to 70-200mm, will help you conceal the surroundings while capturing close-up pictures of the caldera. There are plenty of unique moments to capture, such as the splashing magma, the flowing lava, fire holes, and red lines along the mountain.

Are People Visiting the Eruption? 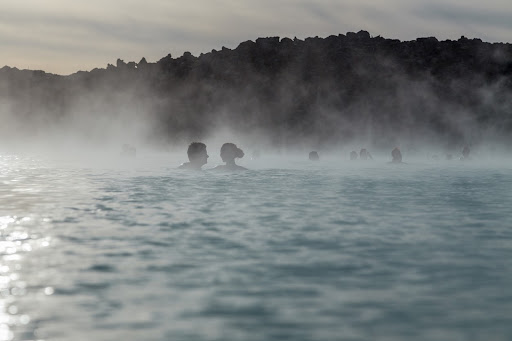 Lovers looking at each other in the Blue Lagoon, Iceland

While Iceland is well known for its active volcanoes, none have happened in the Reykjanes peninsula for decades. The reawakening of a volcano in the area indicates the beginning of a different era. The location was already popular with visitors touring the Blue Lagoon geothermal spa.

Any seismic activity, including the initial earthquakes, happened in a year, bringing forth an eruption in 2021. Initially, officials quickly restricted hikers in the area because cracks opened up along some hiking paths. However, there is no imminent danger to the visitors now flocking the area. Authorities are monitoring the situation and checking for any threats to surrounding towns. While experts initially anticipated volcanic gas pollution, the problem is not harmful to residents. It's open season for tourists that wish to witness the eruption.

Travel With a Guide to the Reykjanes Peninsula

Hiring a travel guide to hike to Fagradalsfjall is an effective way to make the most of your trip and explore the area. You can organize a private hiking tour for you and your crew to enjoy the volcano. Alternatively, you can take up to the skies on a helicopter and watch the action from above. What's more, you don't have to hire a car. There are self-drive itineraries available to help you stop along the way for a hike.

With Tour.is, you can explore the active volcanoes in the Reykjanes Peninsula and extend your trip to navigate Iceland. We offer you the best tips for your Iceland journeys and help you plan trips to your favorite destinations. Get in touch with us, and let us create the perfect trip for you.